Kiara “Pocket Rocket” Simons mocks geographical limitations on a daily basis. As a young and enthusiastic swimmer, there is more than meets the eye to Kiara.

Kiara currently swims under Eoin in our National Red Squad. Her swimming career has followed a path that has matched her ambitions to be an elite athlete. She commenced her swimming at the York Swimming Club as someone merely seeking fitness and enjoyment from the sport. Kiara then sampled the competitive nature of the sport and made her first short-course State qualifying time in the 50m Breaststroke at the age of 10. After liking the taste of competition, she moved to the Swan Hills Swimming Club where she competed for the next three and a half years, until ultimately finding herself at Perth City. She was subject to the recent re-structure of squads transitioning from National Blue to National Red. When asked what her favourite aspect of our club was, she suggested that the large team environment and altruistic nature of its members was the most appealing part of the Perth City culture and she hopes that she can contribute to this culture.

At the young age of 14, Kiara already boasts a significant list of achievements. Kiara has left her mark on school swimming by making the ACC All-Star’s team in two consecutive years and during 2015 represented WA in the Pacific School Games. Out of school, Kiara currently holds records in the 50m, 100m and 200m Breaststroke at her old club of Swan Hills Swimming Club and has competed in the Melbourne State Championships twice. Aged 12 and 13, she qualified for the National Age Championships for the 100m and 200m Breaststroke. Most recently in 2016, Kiara competed in her first open water swim at the WA Open Water States. Potentially discovering a hidden talent, she became the state title holder in the 13 years 5km race. Not bad for a first timer!

Kiara currently resides in the town of York approximately 100km from Perth. Her parents taxi her to training seven times a week and during the 90-minute journey Kiara eats, sleeps and completes homework. For all intents and purposes, she might as well permanently move into the car! When Eoin was asked about Kiara’s travel schedule, he commented that she makes the modern-day “teenager’s problems” look insignificant and that he laughs when he hears athletes complain about being too busy. Kiara really is a perfect example of how athletes should manage their time in order to achieve success in as many facets of their life as possible. I bet her parents have the date that Kiara can get her licence circled on the calendar!

When Kiara is not bound by the constraints of the water and her car, she is a keen Equestrian rider. She has competed in the National Inter-School Equestrian Competition in divisions such as eventing and show-jumping. In addition, she loves Japanese Cuisine and enjoys the occasional and unorthodox Lychee Soda.

Kiara Simons certainly has an interesting and eventful life. If you see her walking past, make sure you say G’day and get to know Kiara Simons. 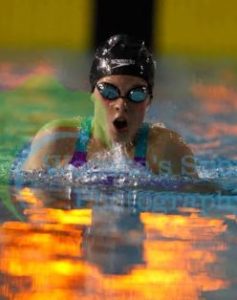