Perth City turned up to have three finalists for the evening session – Damian Fyfe (100BK), Tamsin Cook (400FS) and Will Rollo (100BR). All solid heats swims taking advantage of good preparation from Day 1 being ready to race hard in the heats to give themselves every opportunity to earn a place in the finals. 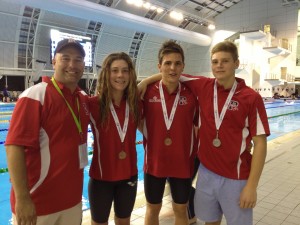 While those not swimming had their individual requirements to fulfill with sessions or preparing team meeting speeches the finalists prepared for a solid night of hard racing.

Damo was up first with his 100BK. An important and race requiring speed for the distance.

Damo set himself well with a solid first 50m against Nicholas Groenewald (Vic). Getting fast and furious Damo came out head to head with Nic after the turn.

Bringing those ever long kicks sets into action Damo powered home to finshed with SILVER in a sizzling 57.63. Damo demonstrating his array of talents over different disciplines and distances.

The good hear through the grape vine is that Millsy has collected some ‘to die for’ kick sets of fellow coaches in  fact I believe Mack Horton’s coach. Whoohoo challenges – love it!

Second for the Perth City team was Tamsin in her 400FS. It was set to be a great race digging deep  and challenging oneself. Tamsin set into her race plan knowing her strengths. Positioned well at the 200m mark Tam initated the fin al stages. In a cracking race Tamsin came home in a “neg split” by 1.5seconds. A clear showing of the ‘backend’ work the team has been doing. Tamsin won BRONZE in a great time of 4.20.45. 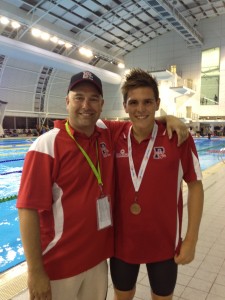 The final race for the Perth City team was Will in the 200BR with three other fellow WA swimmers. Having PB’d well in the heat the aim was to maintain consistency and tighten up a few of the areas from the morning. Working to plan Will’s first 50m was managed and controlled. He worked through the next 3 50’s with consistency.

It was an exciting fourth 50 with Will placing himself in the top 4. Having a quick glance in the grandstand to make sure Mrs Rollo was not rolling down the grandstand in excitement – Will was headin home strong.

With the crowd on their feet and the WA supporters cheering hard for the WA swimmers it was clear Will had a feel for BRONZE. In another swim of the night Will hit the wall for BRONZE in another PB of 2.25.90.