Day 1 and Perth City plays all the right cards

It was a fantastic start to the Australian Age Championships in Adelaide.

With several team membrs racing day 1 it was always going to be a big show.

Jordana ans Georgia had good heats swims. With Jordana coping well with a curve ball in her bathers tearing before her race.She adapted well and with a spare pair on hand focussed on the job ahead. Montana posted a good effort from a disrupted preparation. 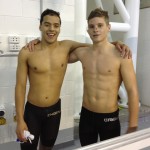 Tamsin made the final for the 100FLY. With another PB in the final Tamsin finshed fourth in a very classy time of 1.02.53.

A blistering time in which would have medalled in previous years.

The 1500m FS boys had their timed final. With Paras swimming one of the most gruelling events – 1500m FS solo as the only morning swimmer in a field of eleven. Although not a PB it was a solid effort surrounded by his Perth City team mates.

Brett had the finals race. In what set out to be a rocket pace Brett swam a consistent effort to touch just outside his PB.

This was “deemed’ to be the warm up for his race for the “TEAM” in the 4×100 Medley relay immediately after.

The Perth City ANGELS were up first in their 4×100 Medley relay. It was a breakdown of good swims by all but unfortunately all times unofficial as the girls were disqualified. taking the result as a true team they then sat poolside to watch the Perth City Titans to race in the 4×100 Medley.

Leading off for the BK was Damo in a cracking pace of 58.09 handing over third to Will (BR – 1.06.17) whose strong BR and first race hit the wall first to “Gypsy” Jackson. Putting in in for the “TEAM” Jackson swam an amazing 56.70 which opens the door for the week of racing. Perth City still holding first placew is has come down to Brett to pack away that 1500m pace and whip into sprint mode. Racing the Mack ‘truck’ Horton in the final leg it was one of those races where you knew it was going to have to be unreal.

It is all about WE. We as the TEAM.