Whilst we thought drinking 8 litres of milk in 4days was a milestone reaching the successes of day one had already far out-shone this. 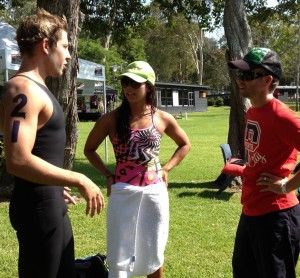 First up again was HOOTS – Australia Team member in the 5km.

With feet firmly back on the ground and back to business like a true professional Hoots was away in the Men’s 5km. What a race with the best in Australia, and the world in the front pack.

A race only the tough would survive right to the finish. A last 450m sprint with the lead changing on several occasions.

Perth City supporters watching closely in the last 50m to see Hoots swamped from both sides. Rivals knowing Hoots was the man to beat, Hoots suddenly disappeared underwater for 5 or so seconds to come up on the outside aiming to break the tactics and again challenge the lead. A fierce finish could not determine the top 6 place getters. Hoots finished a creditable 4th and it was clear his opponents all knew that he was the man they needed to beat on the day.

Club Captain Heidi Gan was next in the Womens 5km. The womens race was a sizzling pace and the leader pack broke away quickly. Heidi swam well in the second pack with consistent lap times. Heidi just keeps on improving which is an amazing feat for someone that has been swimming many years.

Right to the end Heidi powered the arms and legs to finish 7th in a field of 28 and only 2mins between 1st and 7th. well done Heidi.

The day was to finish with Bretto (15yrs) and the rest of our Perth City rookies, Nic and Sarah. Having finally completed their rookie tasks it was their time to shine. All three – Callum, Nic and Sarah had gained so much from sharing with great role models Heidi and Hoots. 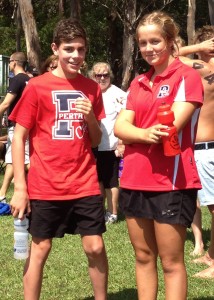 Learning from their preparation, professionalism and motivational insight can be gained in no other way but living with the best. Staying as a team has provided an experience that will be with them for a long time.

Bretto and Nic took to the water in the 14-15yrs 5km in a big field and strong competition. Brett positioned himself well in the front pack. For a while there Brett was leading and repeating his Penrith race to lead 4.8km but then he put into place what he had learnt and dropped behind the leaders to sit in the pack.

Nic positioned himself really well in the mix. Swimming strong and holding onto the second pack – positioned right in the middle. Nic maintained consistent technique and really swam out of sight.

With a race on Brett worked hard and backed up after his 10km swim to dig deep and sprint for the finish to take GOLD for his age group in 1hr 03mins 09secs. Holding the title and completing the double for the second year. Well done Brett.

Nic came in 12th  for the 14yrs group smashing his time and qualfying for 2014 Australian Championships. A great swim in 1hr 06mins 34secs.

The final race for the Championships and the biggest field was the Girls 14-15yrs 5km in which Perth City Sarah Jessop raced. Sarah had a great preparation and really accepted the responsibility of qualifying to improve, get faster and swim like she has never swum before.

As always Sarah entered her race with the cheeky smile and a few nerves but deep down she knew she was prepared. Setting herself up well in the middle pack Sarah loves a bit of surf and hussle ‘n’ bustle. Working into a good pace and always showing the want to move up to the next pack. As a rookie hard to know the success and results of her team mates but with Sarah’s drive for success she also added to the team glory.

Well done to our Super Six; 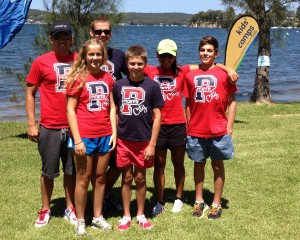