Damo and Tamsin retain their titles

In superb finals racing Damian and Tamsin stole the Glory on Day 3 of the Australian Age Championships.

Damian swam a sensational 400FS to watch five young 15 year old boys battle out the 8 lap race. In strengths of each swimmer shining through the boys all turned within a second at the last 100m. 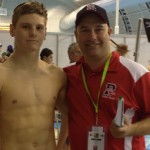 Millsy, although his heart was pounding loud enough to be heard in Perth, knew Damo’s  training commitment, consistency and will to win would give him a real hot chance to finish it strong.

The final turn will the highly watched “Fyfe” streamline put Damo in front sticking to what he knows and how to best do it Damo was the force.

‘Damo is committed every session and buys in to the season plan from day 1. Not once does he doubt what is required of him.’

Damian won GOLD in a history making race with 5 boys going under 4minutes.

Tamsin shone in glory in the girls 200FLY. To defend a title is a huge challenge and another factor of the race. In an amazing stream of splits (3rd 50m a true reflection of the training plan) Tamsin held off her rivals to take GOLD in 2.16.45.

Brett competed in the 400FS final a little slower than his PB heat swim.

Will Rollo sparked up again in the 400IM. Finishing with rolling 4seconds in the day.

The night for Perth City finished with the ANGELS and TITANS in the 4×100 FS relay.

Jordana, Georgia, Emma and Tamsin brought the ‘WE’ to the table with the first three girls posting a PB. Tamsin swam with determination after her two huge finals putting the Perth City ANGELS in the top 10. 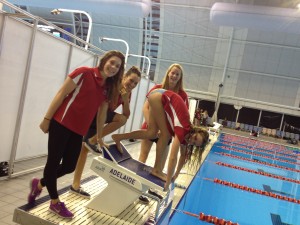 The Perth City TITANS had proven they were the TEAM.

Damian had the team task off putting them in a solid position. Changing over to Gypsy Jackson and then Will. With Mr Reliable Brett bringing it home. The plan was in place with a great start from Damo. Change overs were fast and the boys raced hard to  sit top two. In an all to familiar position Brett had to hold off the challengers. Those 400FS legs held on to touch for BRONZE.

A great night for Perth City.