Day One of the National Open Water Championships saw Perth City light up Lake Macquarie, NSW with three medals and a 5th from 4-swims.

First to go was Simon Huitenga (Hoots) and Brett Fielding (Bretto) in the Men’s 10km event. 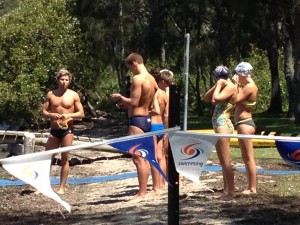 While Hoots settled in near the front of the race Bretto battled it out with his peers and other age groupers not too far from the action. Unlike previous years the course featured an eight lap circuit instead of the usual four however even the extra laps couldn’t take anything away from the idyllic and picturesque location of the race.

WA’s Rhys Mainstone took out the race out fast and soon built a 75m lead it was the cool calm and collected Hoots who sat 5 deep waiting for the race to unfold. Back in the pack Bretto was powering on, stroke for stroke setting himself up with a handy lead over his age group competitors.

It wasn’t long before Hoots made his moved and began to reel in Mainstone. The final 3km were a race for the ages as Hoots chased down the lead and Bretto stretched his lead in the age group competition. The final lap came down to a controlled and well executed race strategy with Hoots finishing fast however the line came just soon enough for Mainstone who held on by just a few meters having almost squandered a massive lead.

Bretto continued to press on and finished a comfortable winner in the Boys 15yrs 10km National Championship race.

Next to go was the Womens 10km National Championship Event. A red hot field including three Olympians including Mel Gorman (AUS), Yumi Kida (JPN) and our very own Heidi Gan took to the water to contest the fastest race we have seen in some time. An early breakaway in the first kilometre by Queenslanders Gorman, Gubecka and DeFrancesca put an end to any other swimmers hoping for a medal.

Gan settled in with the chasing pack of five including former teammate Jess Walker (now of QLD) and AUS World Cup competitors Alice Whiley and Leah Cutting both of South Australia. Together Gan and Walker worked tirelessly to take the girls back up to the lead however Gorman and Gubecka were swimming strong out front.

The chase pack headed up by Gan soon began to split with Cutting and Whiley falling away and Walker and our Perth City girl Gan setting up a tidy break. The race at the front never looked like letting up and Gan was stuck in a battle for a Top 5 finish with Walker. In the end Gan who finished way outside the Top 10 last year swam a gutsy effort to secure 5th place and with it more valuable experience to add to her emerging open water campaign.

Finally in the early afternoon seabreeze it was first time National qualifier Callum Lauriston who entered the mixdiving in for the Boys 13yrs 5km National Championships. With invaluable tips from his teammates pre-race Lauriston was ready and raring to go in the hotly contested event.

As the starters gun sounded Lauriston took off like he was in the Final of the 50m Freestyle at the London Olympics and soon found himself sitting pretty in 5th spot after the first lap. The lead stretched out and

Lauriston worked hard into the wind and took advantage of the “runs” coming home to pick off the first and then second swimmer ahead of him to put himself into medal contention with just one lap to go.

With the wind whipping up a 2ft chop Lauriston powered on with the dais in mind and extended his lead over the chasing group to well and truly secure his position in the Top 3. As the race headed into the final kilometer it was Lauriston who swam with maturity and composure to fly under the finish banner and on to the medal dais for bronze at his very first National Championships.

Day Two commences at 0800hrs Sunday with the Men’s Open 5km. Also featuring Women’s Open 5km and the first hit out for rookies Sarah Jessop and Nic Rollo also over 5km in their respective age groups.